The Concrete Garden – Land is Freedom! A call to reclaim our cities 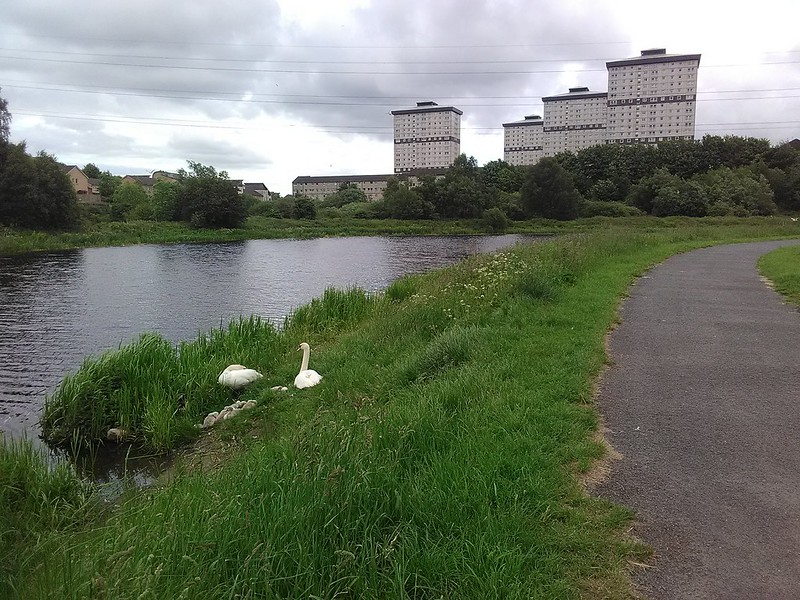 I’m back where it all started for me – Glasgow, its pubs, the rain, Kelvingrove park, the persistent smell of fish and chips, and the nicest people I have ever met.

I was a student at the University of Glasgow last year through the Erasmus program, and absolutely loved my time there. So after two months of travelling in the Scottish countryside, it was time for me to come back to my favourite city, to see friends and to volunteer with the Concrete Garden, a community garden based in the north of Glasgow, which uses permaculture principles.

I spent a week there, participating in different volunteering sessions, a volunteer action day, and a Permaculture Design Course weekend, with two ‘urban growing community workers’, Kate and Paula.

Being a city girl myself, I was extremely impressed when I saw how much life could be created behind a wooden panel on busy Balmore road. The Concrete Garden is a place where you feel good; it’s a place where people come and go, with their histories, their problems, their joy, feeding the chickens and watering the vegetables, planting seeds in their plots and weeding the communal beds; it’s a place where you can sit and have tea and chat with the neighbour you would never have met otherwise and feel like although no gardening was involved, you’ve just ‘obtained a yield’.  They have opened a second garden, the Back Garden, in the same area, where I also volunteered for a couple of day and had an amazing time. 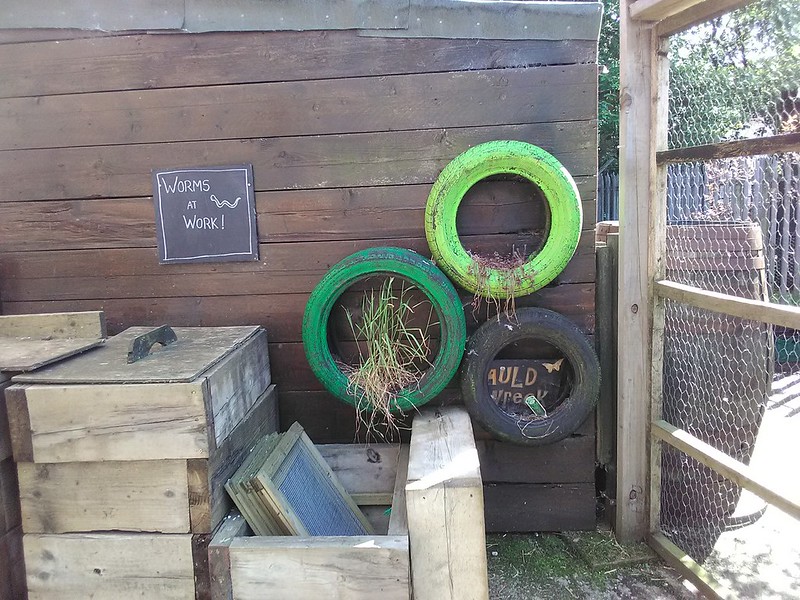 Before I start, I have made a comparative table that summarises my findings so far on both rural and urban projects, in terms of aims, strength and weaknesses.

My goal is not to assess the projects per se, but rather to emphasise the fact that they obey to different logics and therefore participate in different ways to the core goal of an ecological society.

Looking more particularly at the strength and weaknesses found in both sort of projects, I came to the conclusion that in order to build an ecological society, a strong focus should be the reclaiming of public spaces in cities, alongside the reclaiming of land in rural areas, in an interconnected process.

Land and Freedom
'Tierra y Libertad!’, wrote the Spanish and the Mexican anarchists on the walls. Land and Freedom. A big part of these social revolutions were embedded in the notion that land was at the centre of inequalities, injustice and systems of oppressions; and they therefore sought to reclaim lands from big landowners and redistribute it amongst the local population, or collectively use it.

The Commune of Paris in 1871, or the city of Barcelona during the Civil War, are examples of how this thinking can be applied to major cities, in which factories and enterprises became – for a short period – collectively owned in cooperatives based on consensus. More recently, movements like Occupy or Nuit Debout also sought to reclaim public places for their inhabitants.

Let’s remember that until recently and the use of petrol-powered lorry to distribute food coming from the countryside to the cities, having land was a vital necessity – even in cities like Paris. In 1898, it is estimated that over 50,000 acres of the city were given to the field culture of vegetables. The manure came from horses, predominant back then, and which was left to rot underground, enabling the culture of mushrooms. Up until the 1940s, it was 2,000 tons of mushrooms which were produced each year in the capital. (i) 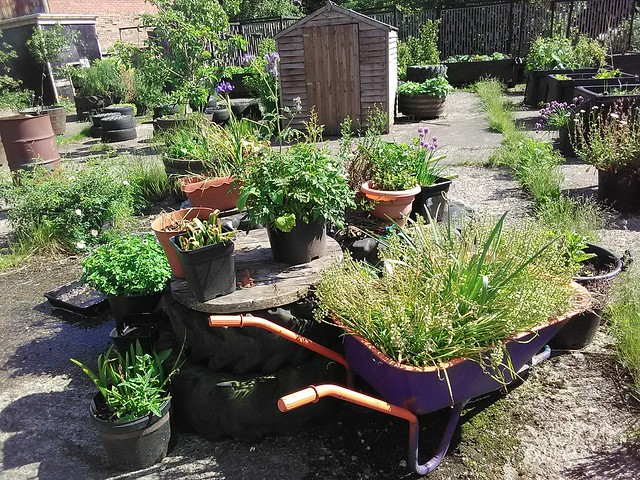 But more than just responding to the crucial demand for fruits and vegetables, I would argue that  having land was also a considerable leverage force for marginalised groups. The abolition of slavery following the American Civil War led to many former slaves questioning their newly found freedom and emancipation if they couldn’t have land. Indeed, without the Homestead agreement that had promised them acres of land to work on, they were free but homeless, and often compelled to go back to work for their masters, or other masters, for a pittance. "The promise of land, whether worked individually or collectively, was that one would no longer work under the arbitrary command of another." (ii) Owning land, even collectively, meant having the means to survive – although maybe in very dire conditions - and a degree of control over which jobs were acceptable. Therefore, having land was the condition sine qua non to free citizenship – ‘all forms of economic dependence are incompatible with free citizenship.’ (iii).

In a world where most of us live in cities and rely on fruits and vegetables coming either from the countryside or from faraway places that we will probably never visit, in a city like Glasgow where only 27% of the population has access to a garden, we have forgotten the importance of land in having control of our destinyiv. It became a privilege to be able to access land in rural areas and to live on it, and we became accustomed to the fact that 50% of the land here in Scotland is owned by 0.008% of its population (see my previous article), or that we have no right to say what should be done to public spaces in cities. In fact, the land system itself makes it nearly impossible for someone with no financial capital to have land in the countryside. Therefore, if not inherited, having a plot of land to cultivate vegetables becomes a privilege for a minority. 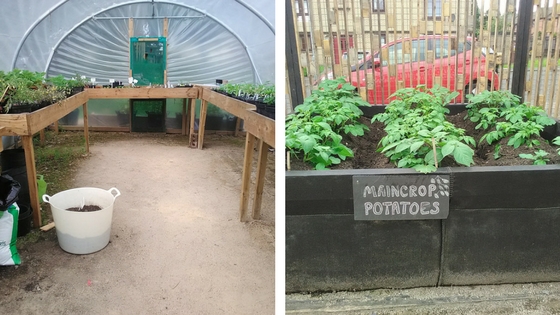 Potential and limits of urban agriculture

In that regard, it can be argued that the new urban agricultural movement is changing that, as it enables marginalised communities in cities to access a plot of land, to cultivate food for themselves either individually or collectively, and to gain a sense of agency by producing commons based on social needs outside the processes of capitalist enclosures (you can read more about that in the comparative table). Moreover, the grassroot, bottom-up nature of community gardens, which usually uses consensus and aims at the total autonomy and independence of community gardeners over their space is, in many ways, similar to some of the anarchist projects I have mentioned earlier on. 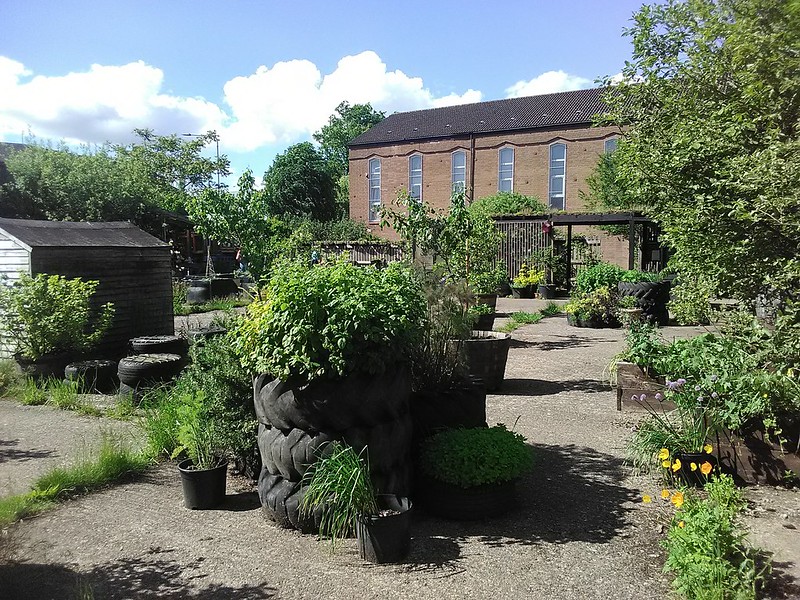 Nonetheless, these projects exist within a breach allowed by the system they are trying to change, potentially because they can be used by that system. The Concrete Garden, the garden I investigated, is one of the hundred ‘stalled spaces’ projects currently existing in Glasgow (v).

Basically, communities are allowed by the city council to use neglected lands, often to create community gardens but also for other artistic or social purposes, for a certain amount of time – before a residence is built, for example. In Paris, the wonderful project of Les Grands Voisins, started in 2012 and used a gigantic abandoned hospital to host refugees and homeless people as well as artistic and social organisations (vi).

It now has a swap shop, an aquaculture farm and a permaculture garden, restaurants and coffee shops in which some of the inhabitants work and are paid in ‘time-money’ that can then be used in one of the many shops, and offers space for debate, watching films, playing football, camping and organising parties.

This place will be destroyed at the end of this year, as it was planned from the beginning, in order to build a new luxurious neighbourhood. It is/was a village of beautiful alternatives within a city in which finance is queen, but it was temporary. This new form of temporary resistance, the creation of microcosms of alternative societies, whether at the size of a massive hospital or at the size of a few metre square of neglected land, are in fact regulated by the neo-liberal system we now live in. A contract is signed; so there is no point in resisting at the end of it.

As long as we exist in bubbles, as long as we agree for capitalism to dictate the rules of our resistance and that of our existence, our impact will be limited.

So what do we do? – I hear you say – A revolution? I think we need one, yes, of which sort I don’t know. I also think that reclaiming our cities, our land, from those who stole it from us, who forced us to be economically dependent on the system (even when we don’t realise it), could potentially change many things for the better (I can hear you breathing a sigh of relief – no guillotine for today).

In cities, guerrilla gardening is an example of one simple way we can reclaim the land. ‘Resistance is fertile’, they say. So let’s act like the city is ours, organise, resist, buy spaces collectively or squat them. Community gardens should have the assurance that their project can be perennial as the work they do is necessary, and takes time to implement.

Spaces like the Concrete Garden or Les Grands Voisins are amazing in that they enable us to see that another society based on social harmony and a different understanding of work is possible. But let’s make these spaces permanent, let’s not confine them to small bubbles that can burst. We should demand that any piece of land unused for long period be permanently given to the community.

We should look at ways in which we can take back neighbourhoods and cities from councils’ power, and make them truly sustainable ecologically and socially – a closer look at the Transition Towns movement can be helpful and inspiring.

Permaculture has its role to play in this transformation as a social movement and as a philosophy. It can offer people a direction, an ethic and a set of principles to organise communities, and to use the land/public space in a sustainable way. Its implementation at the Concrete Garden for instance was a success and was quickly grasped and used as an empowering concept and an interesting gardening tool by the community gardeners – who hadn’t necessarily heard of it before.

But unity through all these different initiatives that are ‘building a new world’ is badly needed, as well as the recognition that an ecological society cannot exist within a capitalist paradigm and that different means are needed to fight against it.

In cities and in the countryside, one of the solution that I find the most interesting is community ownership of the land, and Scotland is an amazing example of that, with Eigg or Assynt in the islands and highlands. I have interviewed historian James Hunter, a specialist of the Highland Clearances, about that, and you will hear more about it in my next article. My next stop is at Tombreck, where the owners are currently looking at ways of giving up their land to the community, organised in a co-operative... It will be my last article and I hope a nice conclusion to my research!

i. G.B, Underground, Overground, The Land

iv. A. Cumbers, The Work of Community Gardens : Reclaiming Place for Community in the City, 2017