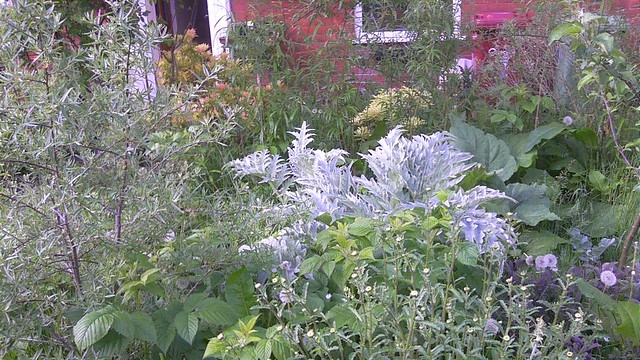 We live on a Council estate in Bolton, and decided around five years ago to do something with the front garden.

All of the front gardens in the street are all lawns with compacted soil, each front lawn measures roughly 14x14ft. Incoming sunlight is limited to around two hours in the morning and then two hours in the evening on the opposite side of the garden as the sun goes down.

I knew the soil needed to be improved so I began aerating the soil with a garden fork, and simply made lots of holes all over the garden that were around 4 inches deep. Once the space was aerated the next job carried on from spring all the way through the summer and into the autumn -  covering the space with many different layers of grass cuttings, most of which I collected from the park across the road from where we live. Before each layer of cuttings was added to the garden I gently patted down the previous layer with a spade.

The next phase of the garden was digging in two micro ponds, both had previous lives as washing machine doors, the glass is sturdy enough to withstand any temperate climate winter. Once the micro ponds were in place it was time to start the planting! A sea buckthorn shrub was planted in the top of the garden, for both its crop of nutrient dense berries and its function as a biodynamic accumulator, pulling up minerals from deep in the soil. Then I planted an apple tree and a number of fruit bushes including blackcurrants, gooseberries, and jostaberry. When planting bushes and trees in a garden like ours, plant them in the path of the sunrays in order to get good crops of fruit.

Around the fruit bushes were planted low lying herbs including chives, mint and sage. On the outer edges of the garden there is a patch of echinacea and bronze fennel, and there is a small willow area that fulfils two functions. Firstly, it makes use of rainwater as it makes its way down the slope of the garden and secondly, it provides me with willow cuttings for various permaculture and community growing projects I work with. Within the centre of the garden, where the slopes starts to ease off, I plant three rhubarb crowns and a cardoon, all of which are prolific in growth, and don't particularly need all day sunlight to grow well. 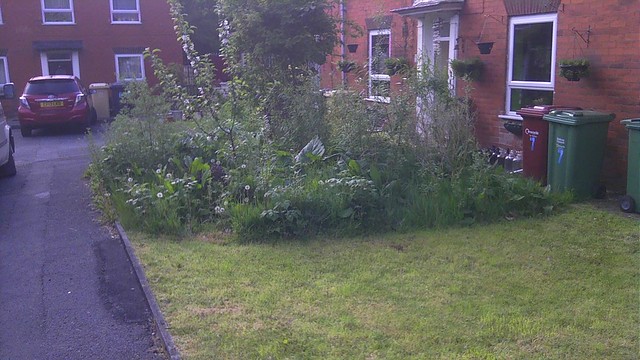 Some wild plants have integrated theirselves into the garden, including dandelions, which I use to make a Greek style Retsina type white wine; plantain, which has a number of medicinal applications, and nettles, which provide me leaves for making brews with, and again they also have a wide range of medicinal and culinary uses.

To put the garden into a developmental time frame, year one consisted of mapping out and measuring the gardens exposure to sunlight, watching the flow of water from rainfall and aerating and adding grass cuttings to the soil.

Year two is when the planting began, again being careful to plant according to height and light needs of each particular plant. In year three all of the perennials were firmly established to the point where I could take both a crop and cuttings.

Yearly maintenance of this garden involves a little mulching here and there, no watering is required whatsoever, and a little litter tidying as the street is fairly close to shops and main road.

With permaculture design we can create productive spaces, without much input once established. Will you design a resilient productive garden?