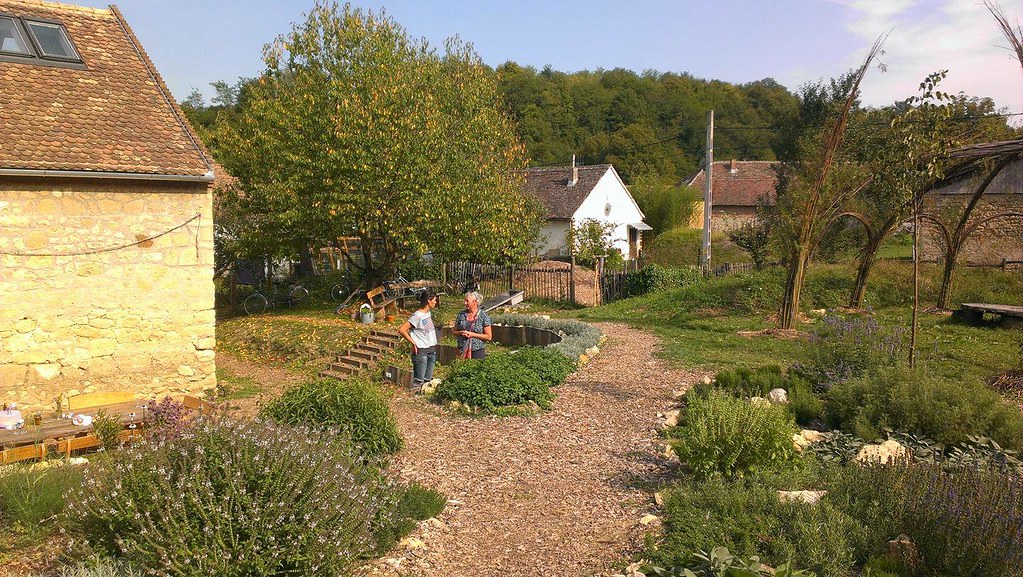 There is a piece of paradise disguised as a campsite in southern Hungary called Hunza Ecolodge. It is located between lush green hills, in the heart of Baranya county near a town called Pécs with a rich cultural life.

This hidden gem was created by a Belgian couple. Roeland and Milady fell in love with the place during their travels and decided to settle down and start a family here. They put lots and lots of love and possibly even more work into building this site.

Having been exposed to permaculture during their travels, they completely embraced its ethics and principles. They use it as the basis for all their projects, which becomes immediately evident when you get there!

That’s the place we, the new local permaculture group from Pécs, visited earlier this month. When I started organising it I thought we’ll have 10 people perhaps, and a nice and cozy atmosphere. It quickly became clear that I underestimated the interest in permaculture, sustainability and alternative living of the locals. So our second group meeting/site visit ended up being a 40 people event! Which is great, albeit frightening, because the whole point of the group is to share knowledge and spread the word of permaculture. Quite a few people there had never heard of permaculture, so it was a great opportunity for them to see it in action. 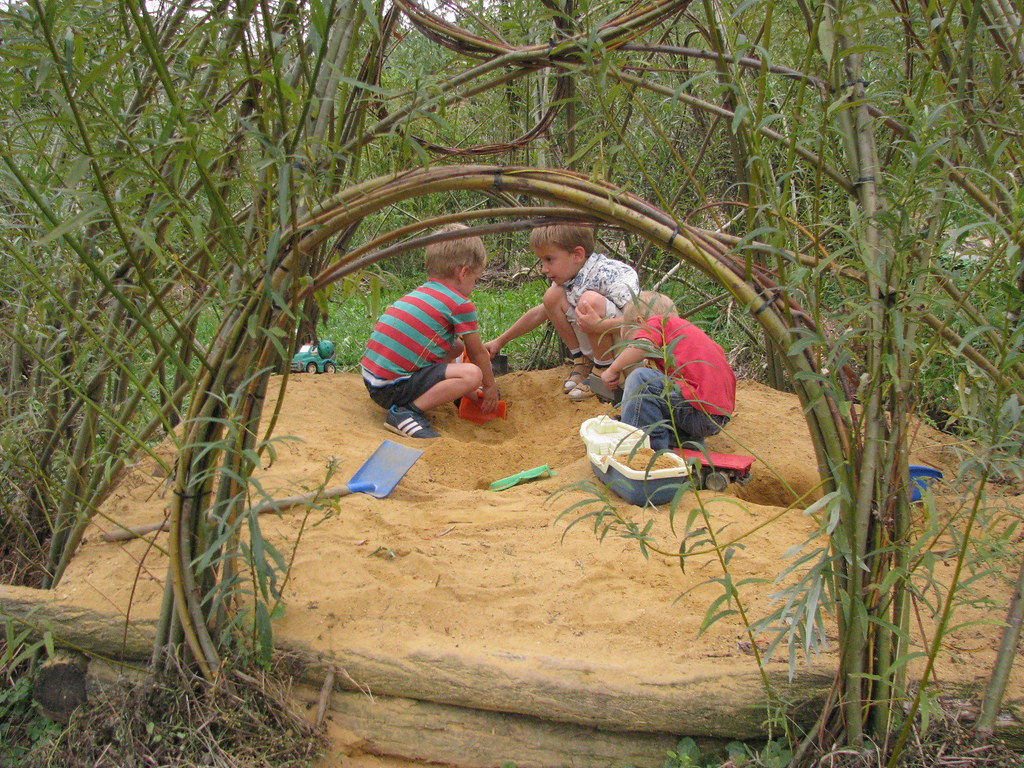 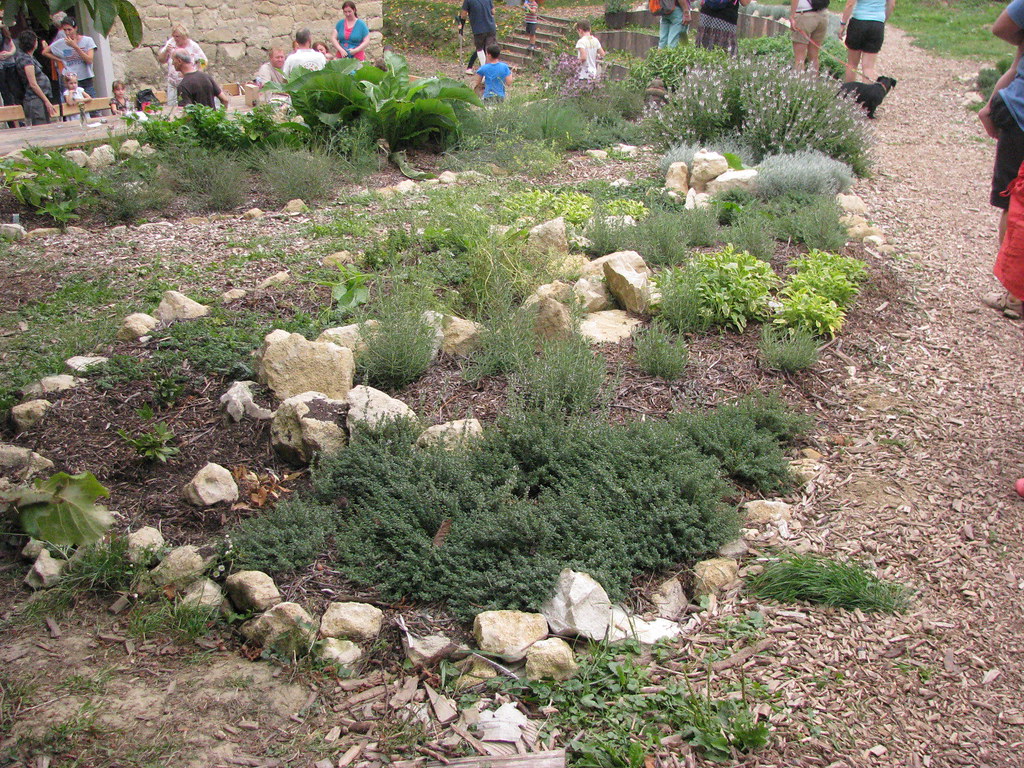 Surprisingly enough, all age groups were represented from the age of 1 to about 75, but to be fair everyone under 10 was more interested in running around in nature, climbing trees, playing in the sandpits and checking out the amazing treehouse. Our hosts and the place itself were super welcoming and family friendly.

After a short intro, Roeland took the group on a tour around the site, starting from the communal area, a refurbished old barn, continuing with Milady’s amazingly lush herb garden with mostly perennial herbs in it. 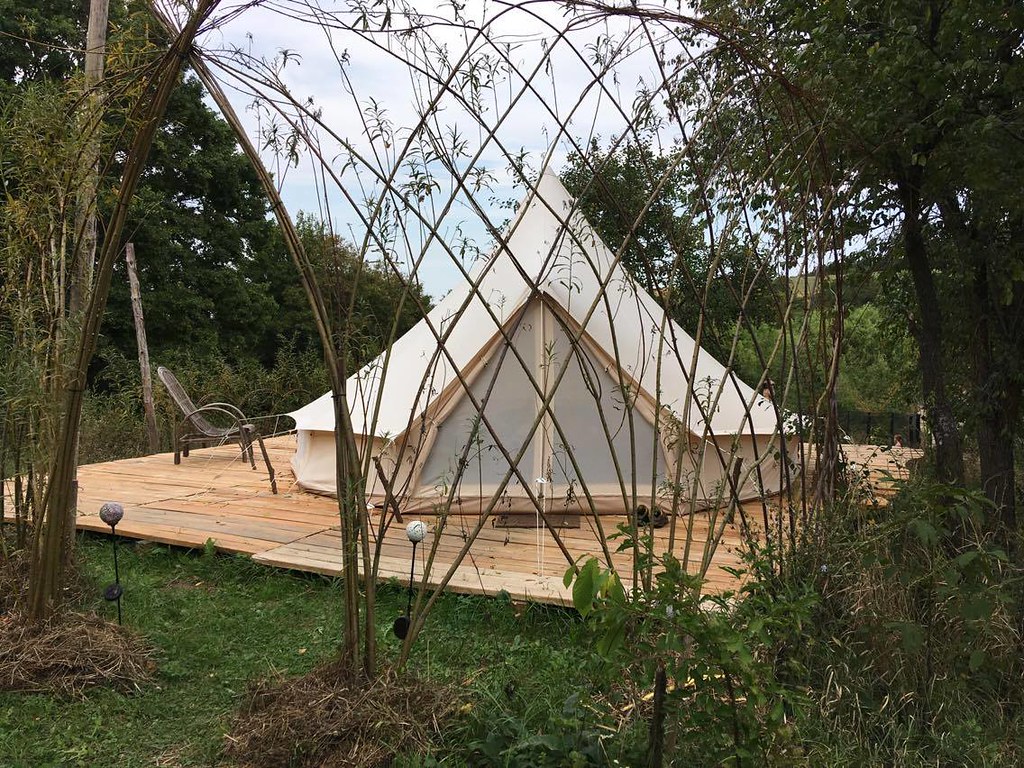 Right next to it we could say hello to the animal population consisting of chickens and the patron saints of a slug-free garden, the Indian Runner ducks. We saw a couple of peacocks too, running free minding their own peacock business.

In this same area was a beautiful, huge willow dome, 12 metres in diameter, which was quite an ambitious family project, Roeland told us.

The next area had a fully equipped summer kitchen a couple more of those cool willow domes and the building containing the toilets and showers. The building was built completely from reclaimed and locally manufactured materials.

They put a lot of emphasis on rainwater harvesting on the site, so the bathrooms’ water system runs on collected rainwater and hot water is achieved by a very efficient woodburner.

The area also has a water feature, namely a garden pond, kept clean by the right combination of water plants. 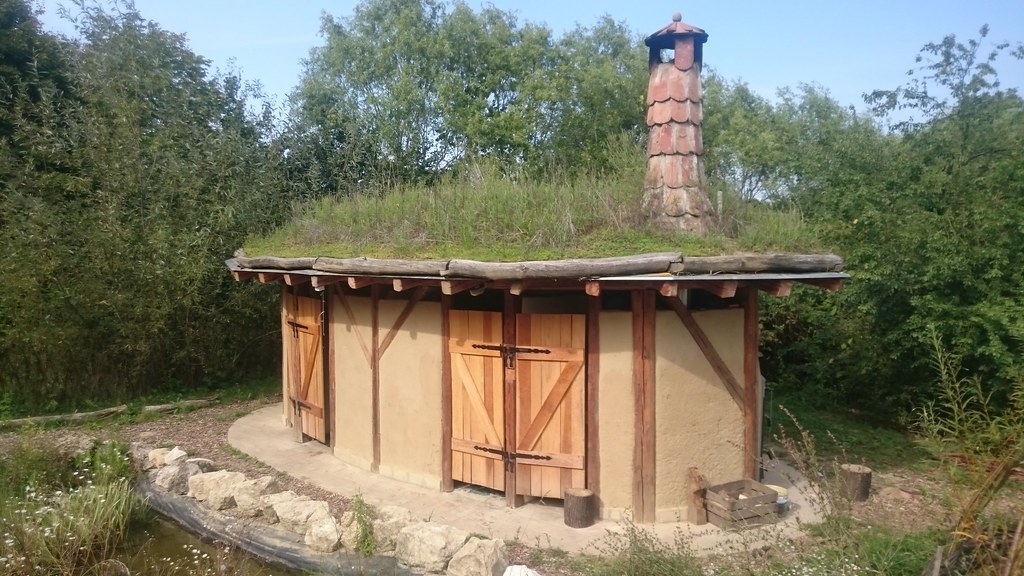 A campsite with glamour

Our journey then led through the campervan area to the edge of the forest where the glamping (glamour+camping) tents were located and another communal kitchen area for cooking, good times and chill.

In this part of the site compost toilets were the norm and our hosts put a lot of effort into making this area, where civilisation and 'wilderness' meet, as welcoming as it possibly can.

After all, the whole point is to give people a relaxing time in the embrace of nature and to encourage them to explore it. To give them the incentive an enchanted looking “fairy gateway” was built through which the fairy trail leads into the forest. It’s all very charming!

The next stop was the coolest part of the campsite: the treehouse! Needless to say the kids went nuts over it, and so did the grownups. It’s basically a full blown house in the canopy level, with all mod cons, that takes ecotourism to a whole new level (get it?) And it looks amazing! 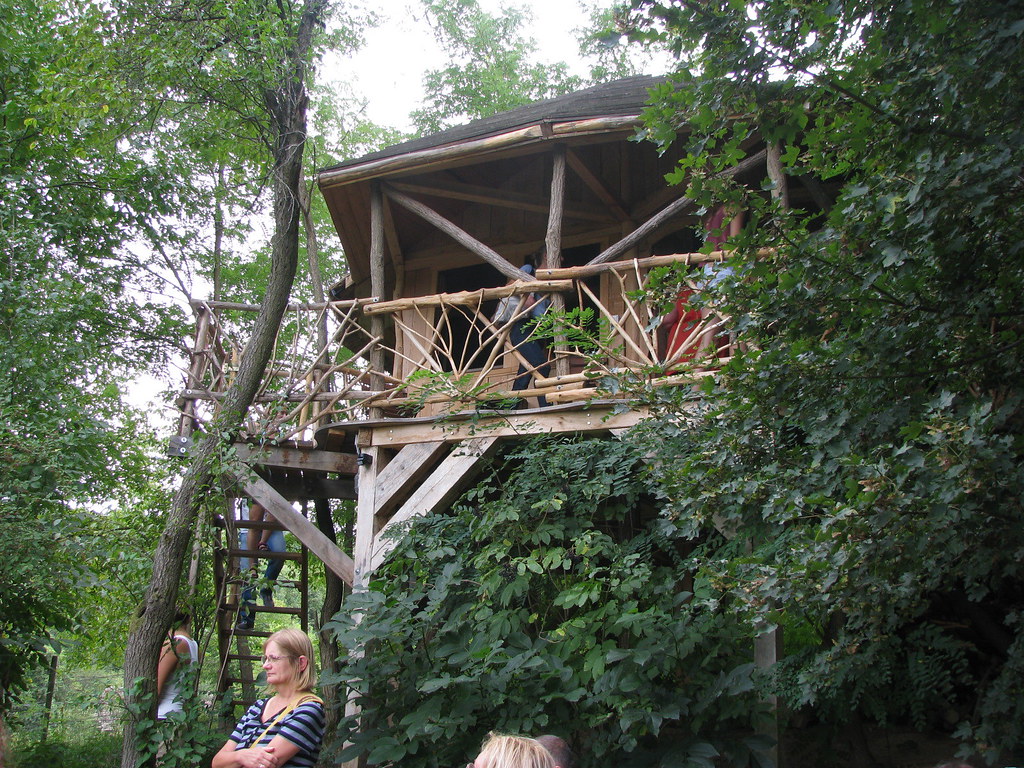 Next, we looked at the permaculture garden grooved by swales, housing mostly perennials.

Here, Roeland explained how he dug the swales to keep the rainwater and precious topsoil on the site, and how he’s been improving the quality of that soil by mulching with leaves, straw and woodchips.

They are just starting to give more attention to their garden, as they’ve been focussing on building up the tourism side of things first. Still, they had a good yield this year, which provided organic, home-grown ingredients for the meals that are included in their glamping service.

Permaculture in all areas

It seems everything they learned previously, organisational and culinary skills, permaculture design, gardening, knowledge of herbs, and so on, was the perfect preparation to this kind of endeavour.

I personally love how they incorporated permaculture principles into their lives and their business too, not just their garden. It was very important for them to build good relationships with the locals and involve them in many of their projects from the start. They really take “people care” seriously when it comes to guests, volunteers and even locals.

Volunteers play an important part in the system and they are valued members of the Hunza team. Milady and Roeland heavily rely on them as they couldn’t run the entire operation just by themselves whilst raising their two little boys.

It seemed everyone had a good time and came away with lots of useful, inspiring information.

We finished off the tour with a diverse potluck dinner and some light-hearted conversations. The perfect ending to a lovely day! 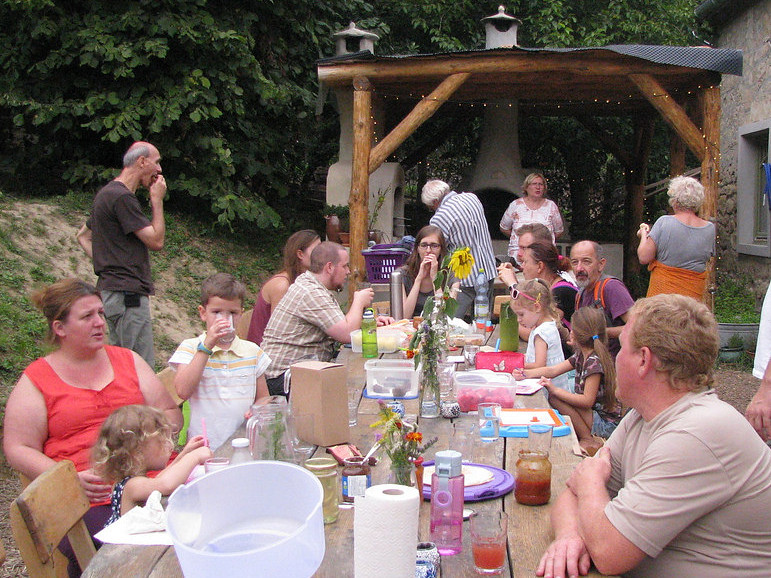 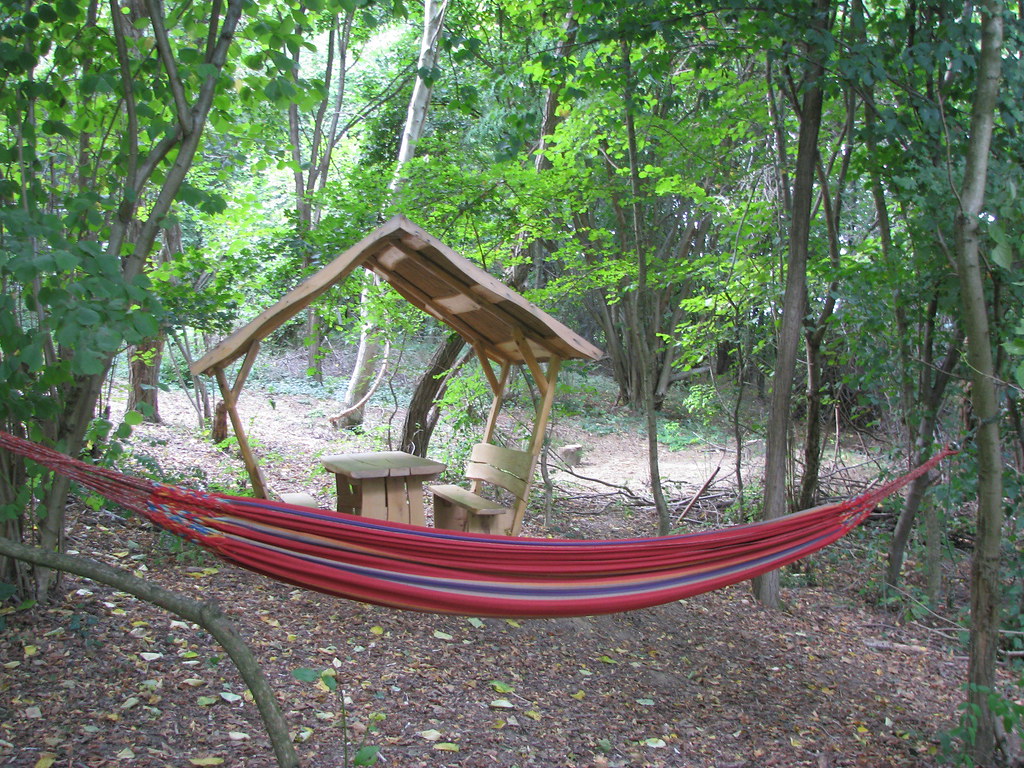 Peter was inspired by our Permaculture Ambassadors project to hold this event. He was supported by our staff in the process.

If you're in the UK and would like to hold an event that has a positive impact in your area, see www.permaculture.org.uk/permaculture-ambassadors-local-gatherings for details of the support available.