Recently I was asked to give a talk about gardening to a small group of environmentalists, after all of my excuses for not doing so - which were primarily a lack of confidence and not having a projector - were swept away. I decided to buy a projector and knuckle down to the task. As I thought more about the content of the talk, I decided to call it My Sustainable Gardening Journey. Below is a shortened version of the talk.

For much of my youth I spent most of my leisure time involved in outdoor activities such as backpacking, cycle-touring & climbing mountains. By the time I reached 45 I was slowing down, and spent more time appreciating Nature. I became a bird-watcher, (though not a very good one)!

For some people, reading about the decline in birds & other wildlife depresses them, but for me it inspired me to do something about it, so I decided to give my garden back to Nature. I built a pond, but as befits my newly passionate self, a piddly little pond was no good for me. Oh no, my pond had to take up a full quarter of the garden!

Once it was completed I turned my mind to a sustainable water supply & reservoir.

From the roof, I diverted the drainpipes into 4 no. 50 gallon drums connected inline, the overflow from the last barrel then cascaded over a waterfall into a stream meandering down the garden and into the pond. Beautiful!

As was the biodiversity that came in that first couple of years, which included amongst others dragonflies, damselflies, frogs and many more birds than previously.

Over the next few years I read widely in search of an answer to a question that was bothering me: Why, is the world losing so much of its biodiversity?

Once you go down this road with an open mind, it does not take you long to reach an answer to this question. You can dress it up however you like, call it ‘progress’ ‘consumerism,’ ‘over-population,’ or a host of other names. At the end of the day for me, it comes down to one word ‘Capitalism’ To my mind Capitalism is not sustainable, certainly not our current unbridled version of it anyway.

So I determined to spend the rest of my years learning & hopefully showing others how and why we should be growing Sustainable Local Food, and in so doing, supporting the natural world.

I began by creating raised beds in my daughter’s garden. Being a member of the charity Garden Organic I naturally wished to follow organic guidelines, which are basically that we feed the soil life (by adding compost, manure or green manure), which in turn feeds the plants. 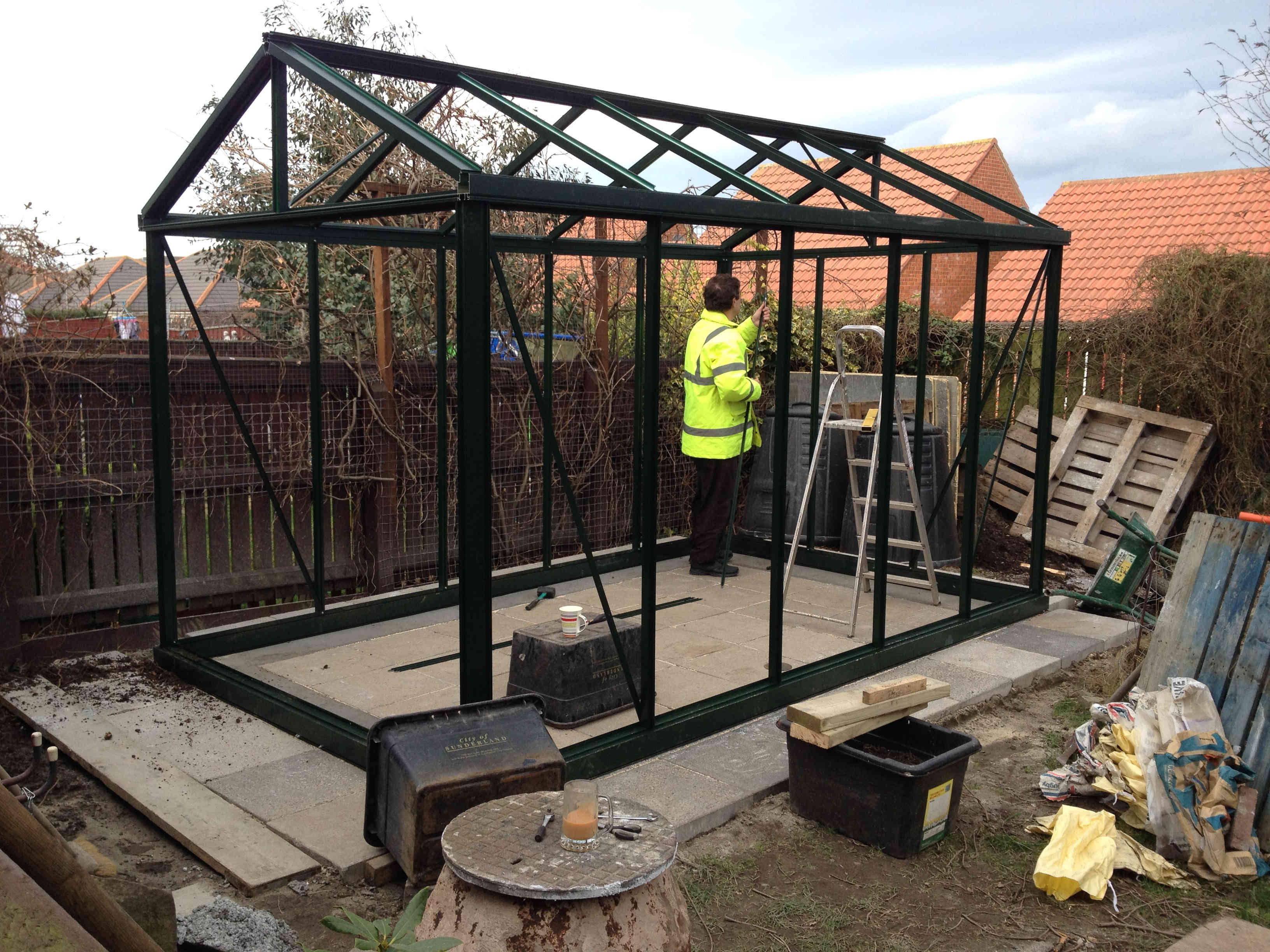 I also wished to follow some degree of rotation, whereby the same family of plants are not grown in the same bed year after year. The theory of crop rotation, for those who do not know, is that diseases and pests of a particular family of plants do not have a chance of becoming a problem by building up in the same bed, also that nutrients are not drained from a bed by continually planting the same family of crops which favour a particular nutrient.

As I completed my daughter’s garden I still wanted more land to grow food. So it was back to my own garden, out with the stream, and in with the greenhouse! The pond remains testament to my love of nature and I hope that the frogs will assist me in controlling any slug problem that may appear in the future. The water reservoir remains, but now overflows into the pond through underground pipework.

The star role of any organic garden is of course the compost heap, which come in two basic types; hot heaps and cold heaps. 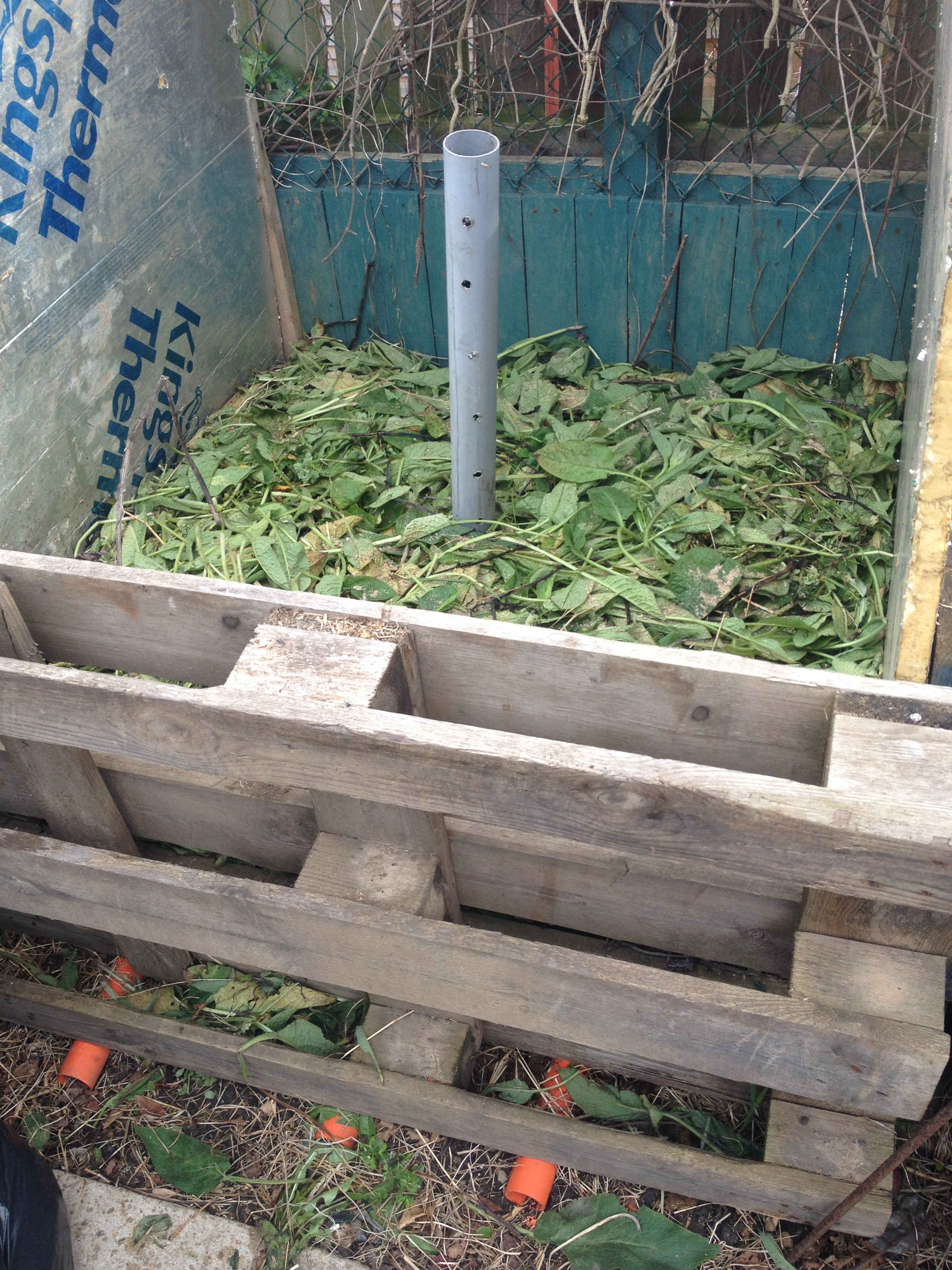 This is my hot heap. These need to be quite large, a minimum of 1.2 cubic metres, preferably larger in order to retain the heat which is produced by the process. Hot heaps need a good supply of air into the centre to feed the microbes which are creating the heat as a byproduct of decomposition. I have three plastic pipes with holes spaced along their length. They are placed on the bottom of the heap & one vertically in the centre.

The benefits of a hot heap are quicker decomposition rates and minimising the risk of any pathogens & weed seeds surviving the composting process. Hot heaps also have to be built within as short a period as possible so that the heat has the large mass to retain it.

Cold heaps are what most people have in their gardens, perhaps the regular black plastic compost bins you may be familiar with. These are still excellent for their purpose but take longer to decompose the material; I leave mine for at least a year before using it, and have been known to add it in layers to the next year's hot heap to go through another composting process!

It was at about this stage in my sustainable gardening timeline that I noticed in my reading, more & more references to something called permaculture. On further investigation I found that I was not alone in these endeavours, but that there are others, many others who hold the same or similar beliefs as I do.

I enrolled on a Permaculture Design Course (PDC) under the tutelage of Wilf Richards. Taking part in this course was an education for me. I already had a grasp on organic growing but I learned much more about: ethics & principles, succession & stacking, design & sustainability issues, and much more than I can list in this short article

Above all I learnt how we, all of us, in making our individual choices over what we consume can have an effect on our environment.

As I considered how to bridge, on a talk which is primarily about gardening, from slides of my garden into two slides titled respectively, Observation & Evaluation of a cup of tea in a typical house, and Design and Actions to Make a Sustainable Cup of Tea, one of Bill Mollison’s attitudinal principles came to mind.

Everything Gardens (or modifies its environment) every creature sets up conditions so that it can thrive. They create and carve their niche in an interconnected web of life.

Give this phrase some more thought and you will appreciate its wisdom. What it means to me is that nothing in nature works on its own, every living thing is a part of Nature, and as any living thing goes through its life cycle it is affecting other living things; from the micro scale, simply by eating and defecating and being eaten and defecated; to the macro scale, the actions of human individuals, both in what they do, their lifestyle choices and in what they choose to buy as consumers. Both are modifying the environment and so “gardening”.

The moral of this story is that whether we choose as individuals to take up gardening or not, we are all of us gardeners whether we like it or not.