The Paddock: Inspiring others to set up their own eco-business 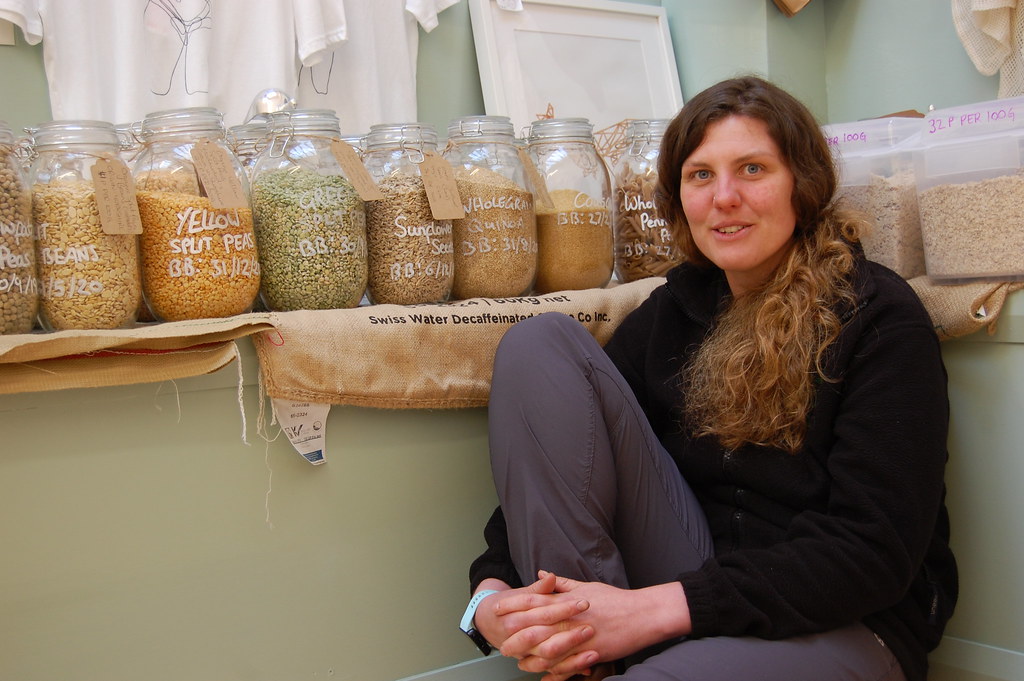 The Paddock is an organic fruit and veg box scheme and farm shop which originated from Laura Burlison's family smallholding in nearby Northumberland. The shop also includes natural wholefoods, a wide range of local produce, a plastic-free pantry and a refill scheme.

The business focuses on minimal packaging and eco-friendly food produced in an environmentally sustainable manner. Laura started the business in 2013, but the family smallholding has been in operation for about 20 years.

Laura originally wanted a career as a youth worker, but when she finished university, cuts to council services and a recession sent her off travelling instead. After spending two years in New Zealand working on eco farms, sustainability projects and fruit picking, she had a complete change of perspective. "I was only 21 when I went to New Zealand, fresh out of university and living very much a consumerist lifestyle where everything was there whenever you wanted it," she said.

"Having grown up on a smallholding, Dad always grew veg and we had free-range eggs and those kind of things. I hadn't really joined the dots between the environment and the way you live until going to New Zealand and seeing how well they do what they do, in particular conserving what they have. I know travelling is often said to be a way of finding yourself, but it honestly did help me realise what I wanted to do."

On returning home in 2013, Laura put it to her Dad that instead of just giving away the eggs from their 30 hens to friends and neighbours, they could sell them instead. They also had space to start growing more vegetables.

"From there I just built the business, obviously realising that if you're going to run a year round box scheme, even without a shop, but especially with one, you're not going to be able to produce everything you need on six acres in Northumberland," said Laura. "It's just impossible. If I wanted to do it full-time then it had to be a sustainable business as well as being a hobby." 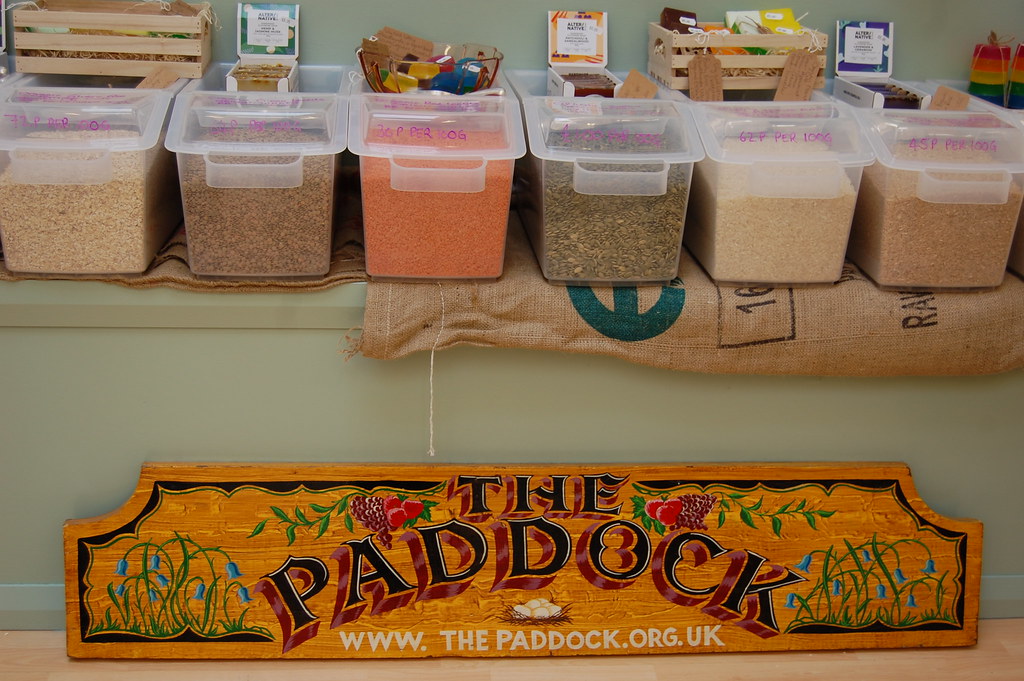 So Laura started building up a network of local suppliers, from North Yorkshire upwards, forming relationships so she was confident she could go out and promote an organic box scheme that would sustain itself all year round. "From that point on I had a wish list, initially self-indulgent really and made up of things I enjoy - fresh bread, honey, jams, chutney, cheese - and started linking up with people who could provide them.”

The delivery service ran for the next three years, funded initially by a start-up loan from the Princes Trust and other small pots of grant funding.

Then in 2016 the opportunity came up for a shop in the building where Laura was already running the box scheme from in High Spen, the village she grew up in and a few minutes' drive from the smallholding.

Having the shop has allowed Laura to continue with the box scheme, but also increase the amount of options for people wanting to live more environmentally aware lifestyles. Customer feedback and support led her to the most recent development which opened earlier this year - a Plastic Free Pantry for household refills and bulk dry goods such as rice, seeds, flour etc.

Get to know your supply chain

One of the most challenging aspects for Laura in running a more environmentally friendly business is supply chain issues. "You only have a limited amount of control over your suppliers," she said. "Although you try to build up relationships with people as best you can, they may also be limited in their options."

Laura gave an example of cucumbers, which still come in plastic wrap from her supplier, despite being organic, and a lot of customers have questioned it. Between her small network of growers they could produce maybe 20-30 cucumbers in polytunnels per week, but that's not enough for 150-200 veg boxes. So she sources slightly further afield than usual, from East Yorkshire.

"It's still relatively local in terms of food miles, but the machine the company uses is set to grade and wrap and it would cost thousands to change that," she explains. "So the other option is take unwrapped ones from Spain, but that's not what I set out to do. That's the two options we have on the table at the moment.

"Now I won't deceive people and stand there and unwrap them all and make people think they're getting an unwrapped cucumber. We try to have honest conversations with our customers about where the food comes from and how it's produced. The plastic wrap is obviously a drawback, but it's a trade off for saving on a lot of food miles.”

It's also the case with dry goods. Most bulk goods from Suma come in brown paper, but there are also some small-scale family businesses in India which are producing enough rice to sell, but not enough to invest thousands in a new machine which stitches the top of paper bags to make them suitable for the UK market.

"You're always going to face those supply issues and we constantly tread a line between demand, supply and ethics," she said. "Things are changing, but unfortunately it's not going to happen overnight because it comes at a cost and that's another factor which affects every kind of business."

Packaging - a sticky subject for shopowners

Packaging is another hot topic for Laura's customers, which is largely dictated by food standards and environmental health regulations.  Yoghurt pots need a certain seal which will keep it fresh for a month and there are currently few biodegradable or compostable options that can match a plastic pot.

"Our yoghurt is local, organic and handmade by traditional methods from a small herd of Ayrshire cattle, but it's still in a plastic pot that they can't take back," explained Laura. It's the same for glass jars as often they can't be returned to be re-used by the producer either.

Although the 20 litre drums used for the shop's refill system can't be re-used either, Suma takes them back and gives them to a local recycling plant in Yorkshire which melts them down to reconstitute into new drums.

"We're making huge steps towards lower impact lifestyles but it's by no means a closed loop yet," said Laura. "There's still a lot of work to be done across the board - from consumers, producers, small businesses and the whole supply chain - most importantly the supermarkets because they still have the monopoly on the market."

The popularity of a Plastic Free Pantry 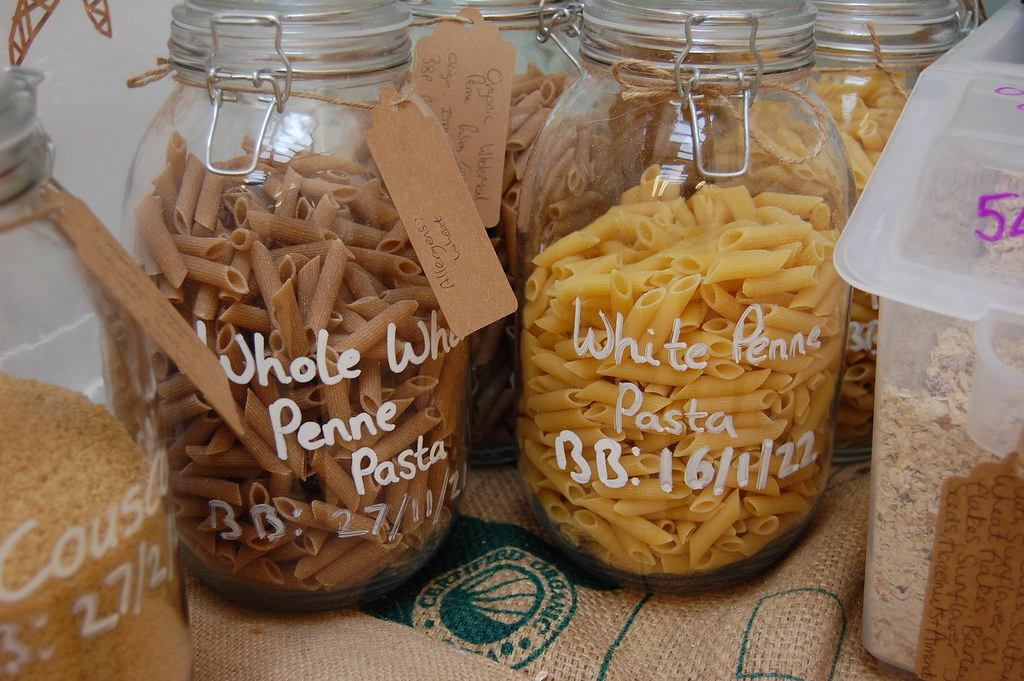 Laura has been overwhelmed by the response to the Plastic Free Pantry, which opened in Spring 2019 in a back room of the existing shop and stocks 29 different products. She started out with refills for household goods because she decided it was one of the main sources of plastic waste. The shop was already selling items such as oats and flour in paper bags and may other products came in glass bottles.

The pantry was funded through a Crowdfunder campaign that raised £2,500, supported mainly by existing customers who pledged everything from £10 to several hundred.

The biggest costs were the containers, initial outlay of stock and trading standards approved scales. "It was done very much on a budget," Laura explained. "We don't have a labelling machine - they can be over £5,000 - or expensive dispensing wall systems."

The bulk of the products are in plastic containers - which are obviously used again and again, with glass jars for seeds, oats etc.

Despite all the hard work involved, Laura's advice for anyone thinking of doing something similar is this: 'just go for it'. "I have no shame in saying we've had a lot of loans which I'm still paying back, but that's the reality of being a small business owner,” she said. “If you're really passionate about it and work really hard, then you can pull it off.

"It's not easy starting a business, but if you're planning on starting something like this, you're doing at the right time. When I started seven years ago even the organic fruit and veg side was still a niche in our small village. And while we're definitely still a bit unusual or quirky, the issues being tackled by a plastic free pantry or zero waste shop are now in people's minds all the time."

To begin with, Laura did a lot of marketing, but now the zero waste and plastic-free movement has taken off, she finds the media do most of the work for her. "Things like the Attenborough programmes and climate change protests in London switch people onto these issues," she said.

“If you want to give it a go, just try it. So many people are really receptive to what we are trying to do now. The other day I had someone on social media from Sao Paulo saying they wish they had a Paddock close to them! There's room to have one of these in every town and village - not just city centres."